A Bite Bigger than the Bark - Arborist Now

Bark beetles are small insects, but don’t let their size fool you.

The strong jaws of these beetles chew and create a buckshot pattern of holes on the bark surface of infested branches or trunks of trees, causing widespread mortality in forest and forested communities. About the size of a grain of rice, most species have cylindrical, hard-bodies that dark red, brown, or black. 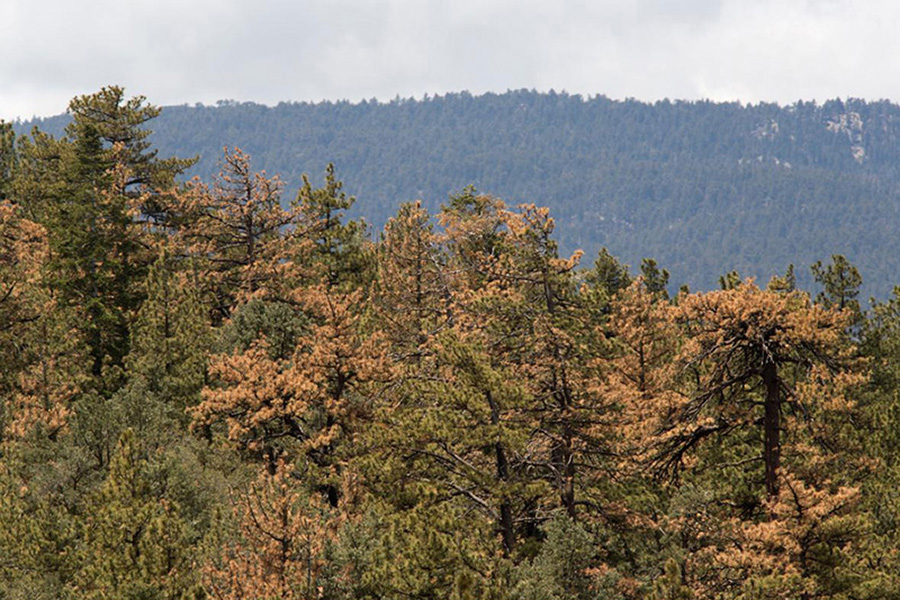 Under outbreak conditions, the sheer number of beetles can overwhelm the tree's defenses with resulting impacts on the lumber industry, water quality, fish and wildlife, and property values.

Bark beetle infestation is easily spotted. Bark beetle activity starts on the bark surface and extends to the inner bark of twigs, branches or trunks. A living tree can be killed by the feeding activity of adults and larvae, which damages the phloem in such a way that the tree is girdled. The beetles also introduce several species of fungi which invade and infect the wood. The first sign of a bark beetle infestation in a tree may be the discoloration of the needles that occurs when fungi block the xylem and prevent water transport to the foliage.

The following are additional signs that a tree may be infested by bark beetles:

On Leaves or Needles

Bark beetles reproduce in the inner bark of trees. Many species attack and kill live trees. Most, though, live in dead, weakened, or dying specimens. Bark beetles play an important role in forest ecology and can have significant economic impact. In undisturbed forests, bark beetles serve the purpose of hastening the recycling and decomposition of dead and dying wood and renewing the forest. A few species are aggressive and can develop large populations that invade and kill healthy trees and are therefore known as pests.

The staff at Arborist Now is experienced in finding and treating problems created by pests and diseases that can decimate the trees on your property. Our tree care services in San Francisco and surrounding areas are extensive and affordable. Contact us for a consultation.