With so much media attention focused on our environment, most people are somewhat familiar with pests and diseases that can have a devastating effect on specific trees such as the Emerald Ash Borer and sooty canker.

However, there is a lesser known threat to many established trees in existing landscapes and it is not limited a relatively small number of tree species. The disease is called Armillaria Root Rot. Actually, it is quite common – homeowners and even professionals in the tree care industry have seen trees die from the disease, but many never find out what actually killed the tree.

What is Armillaria Root Rot and what is its origin?

Armillaria Root Rot (often called oak root fungus, mushroom root rot or shoestring fungus rot) is caused by a fungus found in the soil which attacks and rots the roots of many plants and trees. Armillaria also serves a specific purpose in the forest. Acting like Mother Nature’s clean-up team, it breaks down dead tree roots and stumps, but it also will infect live root tissue, especially in trees already under stress or in decline. The fungus is present in almost all soils that at one point had many trees growing in them, such as a forest. Most likely, if homes were constructed in an area where a forest was removed, it is very likely the fungus remains in the soil. Through research, former prairies and long-established farm fields show little or no active Armillaria. In urban settings, the range of hosts for Armillaria is quite extensive with oak and maple trees particularly vulnerable.

Some of the symptoms of Armillaria Root Rot include the dulling of normal leaf color and the loss of a tree's growing vigor. Often leaves may wilt and turn yellow or brown. Major branches can also die or show excessive signs of wilt. Armillaria Root Rot often causes fruit trees and ornamental trees to slowly die over a period of several growing seasons, but the rate of death can accelerate considerable if the tree is also under insect or nutrient stress. 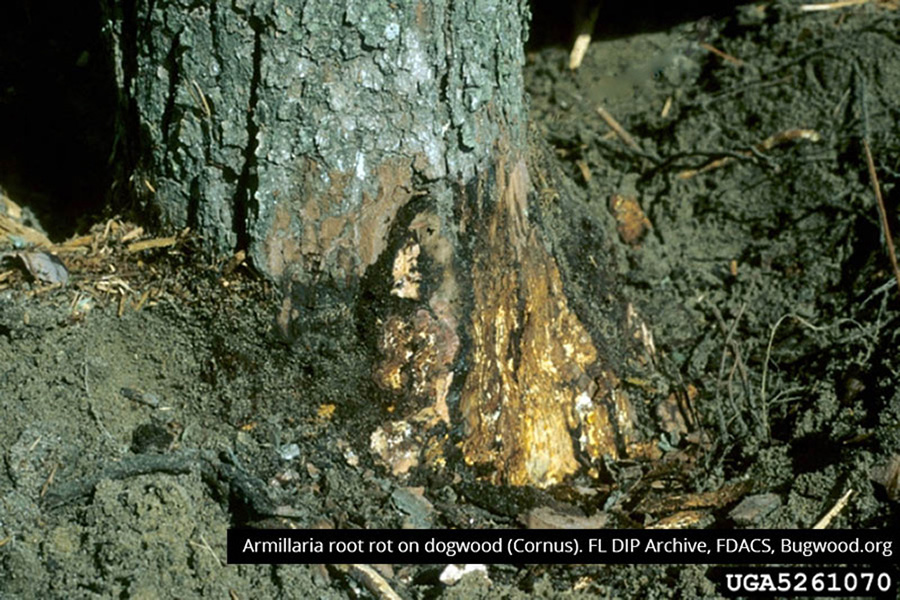 One characteristic stands out – and it’s spooky!

There is something about Armillaria that really has nothing to do with pathology of the fungus. Its mycelium – the vegetative part of a fungus, consisting of a network of fine white filaments – glows in the dark! The mushrooms associated with the fungus do not glow very much, but if a piece of wood with advanced decay caused by Armillaria is opened and viewed in darkness, most likely the luminescence – the emission of light by a substance that has not been heated – is seen. The amount of light varies greatly from different pieces of decaying wood, but some pieces are quite bright. Other fungi glow, but Armillaria is the most common and widespread luminescent fungus.

Imagine how curious it is to see glowing bark, and imagine how "glowing" wood inspired folklore and mythology. Often referred to as "fairy fire," it is more commonly today called “foxfire" possibly derived from faux or false fire.

It is also interesting to speculate what selective advantage luminescence may provide. Does it perhaps attract animals that serve the fungus in some manner, or is there physiological role in metabolizing damaging waste products?

Research and speculation abound with luminescence, but you do not have to speculate about the quality and variety of tree care services provided by Arborist Now. Whether you need shrub pruning in Larkspur or emergency tree removal in Marin County, depend on Arborist Now for excellent work and affordable prices.