This month we are going to be taking a look at the White Pine Weevil, and discussing how to combat the extensive damage they can cause to your trees.

First let’s take a look at the pest and talk about its features and its abilities. Being able to identify the insect is the first step in combating it.

What is the White Pine Weevil?

So what is the White Pine Weevil ?

This pest is considered to be the most destructive insect pest when it comes to the eastern white pine in North America.

On top of the eastern white pine, this insect also targets Serbian , Colorado blue , and Norway spruces, as well as red , Scots , pitch , Austrian , and jack pines. On occasion Douglas-fir trees can become a target as well.

The White Pine Weevil prefers to attack the trees that are exposed to direct sunlight, and trees become a target for them when they grow over 3 feet tall.

The adult insect is a very small, rust-colored weevil that grows to be about 4 to 6 mm long. It has oddly shaped patches of white and brown scales on the front wings, and near the apex of these wings is a large white patch. Like other weevils , the White Pine Weevil has a long beak that looks like a snout, which small antennae arise from.

When this weevil is at the larval stage , it lives beneath the bark of trees and is white with a very distinct brown head. As it matures, the larva grows to be about 7 mm long, slightly C-shaped, and legless.

Adults will spend the winters around host trees in the dead leaves surrounding them. Once the warmer spring days come around, they crawl or fly to the leaders of decent hosts – this usually happens from the middle of March to the end of April. From April to early May, females will mate and deposit between 1-5 eggs in feeding wounds, which will hatch in about a week’s time.

The larvae reach maturity between mid to late July and will pupate in the infested terminal of the host tree. Then adults will emerge between 10 and 15 days later.

What Damage Does it Cause to Trees? 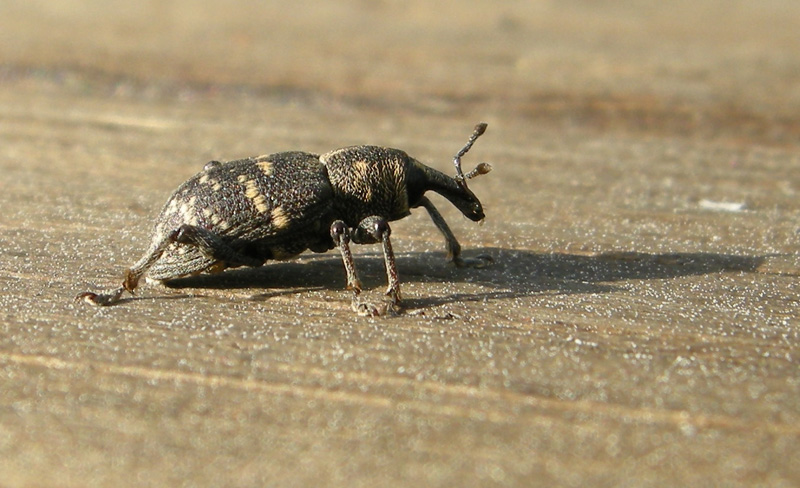 So how about the damage they cause – how serious are White Pine Weevils in terms of destruction?

The first indication that your trees may have been successfully attacked by this insect is having glistening drops of resin on the host plant in the early spring. This is the result of the adult weevils making punctures while feeding and cutting sites for egg laying.

When it comes to injuring eastern white pines and some spruce trees, this is usually confined to the growth of the previous year’s terminal leader. The damage on Colorado blue and Serbian spruces, as well as Scots pine will extend downward through about 2-3 years of growth. However, it is important to keep in mind that the trees being infested by the White Pine Weevil are rarely killed.

The most damage you will see from this pest is done when they are in their larval stage. Larvae are found right under the bark of infested trees from the months of May throughout July. The larvae will chew through and burrow completely around the stem, which causes the growth of that year to droop, wilt and eventually die. At this point some of the side branches (also known as the laterals) might bend and grow upward to take the terminal leader’s place. This means that your tree is going to be permanently crooked. Years and years of this damage could result in a completely forked tree as well.

Ways to Get Rid of the White Pine Weevil

So now that you know of the dangers these pests can cause, let’s talk about managing the White Pine Weevil.

If you have eastern white pine trees in your yard that are less than 20 feet high, keep an eye out during the month of July for dead or dying, curled terminal leaders that might have the appearance of a “sheperd’s crook.”

Any infested leaders you find should be pruned and burned before the middle of July to destroy the life stages of this weevil. Make sure to prune all but one living lateral shoot below the damaged terminal – this will promote single stem dominance on the tree.

If you notice resin droplets in early spring, note that this may mean that adults are feeding there. Apply an insecticide as long as its between late March through April when the droplets are first detected. You only need to spray the terminal leader in this situation.

We hope that you have found our guide to ridding your trees of White Pine Weevils useful, and that you are able to rid your landscape of them completely.

If you do need additional assistance with pest control or with general tree care, don’t hestitate to contact Arborist Now today!