As we know from centuries of examples, history cannot be changed, but we can learn from it!  Buena Vista Park in San Francisco, California is a wonderful example of this.

This park has been through everything imaginable, and today it is a beautifully landscaped area with spectacular views and a refreshing family-friendly environment that Arborist Now works hard to maintain. While Buena Vista’s timeline is full of both man-made and natural disasters, it was also always filled with the hope of something better.

This park’s checkered past began in 1867. It was first known as Hill Park, as it is on a steep incline that peaks at 575 feet (175 m). It is also enormous, covering 37 acres! This hill is connected to Haight Street to the north, and by Buena Vista Avenues West and East.The park was established by San Francisco’s Committee on Outside Lands, who had to pay around $90,000.00 to remove the squatters residing on the land at that time. 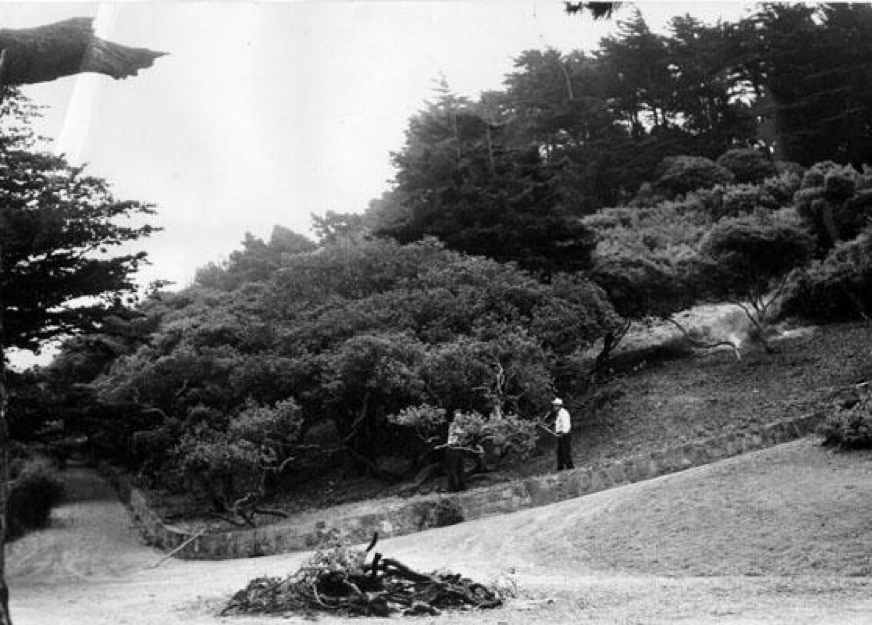 It was renamed Buena Vista Park in 1894, which means ‘good view’ in Spanish. The city also rejuvenated the land with extensive plant life, expanding from native oaks and toyon trees to exotic eucalyptus, cypress, pine, and Australian tea trees. After this initial refurbishment, this nature reserve became a gathering place for the community. Locals congregated there in 1906 to watch the many fires enveloping the city after the earthquake that year, and then they came together again in 1913 to renovate the park and the roads surrounding it. They were able to resurrect the area by building new stairways, paths, and tennis courts - erasing the damage from the natural disaster. A creative approach was also taken to deal with the erosion problem. 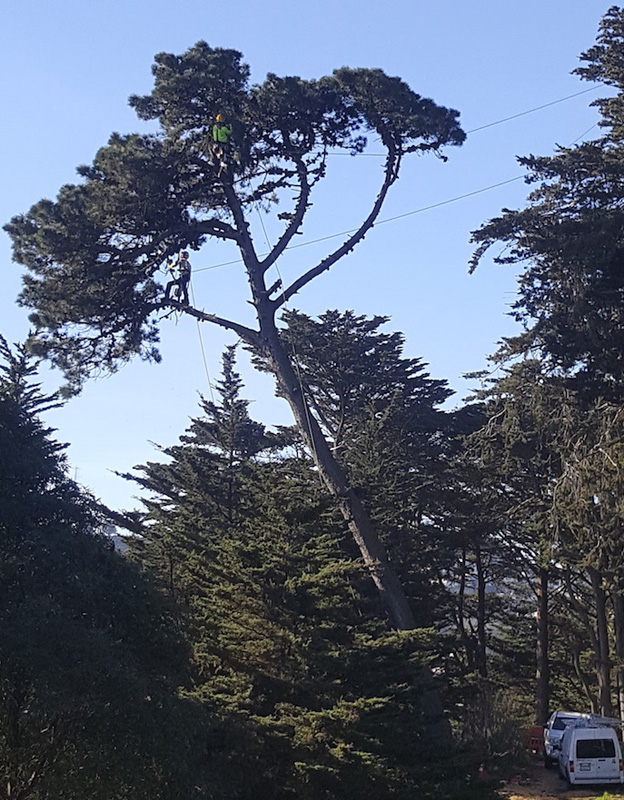 About a year later, San Francisco’s board of supervisors sent removal notices to the city cemeteries. Due to public health concerns, as well as the idea that cemeteries were a waste of land and the growing city population, they were considered a nuisance to the health and welfare of the city. There was quite a bit of resistance, as this would require moving thousands of bodies and was considered disrespectful. Twenty years later however, the supervisors won the battle. In 1937, the cemeteries were uprooted, and the coffins and tombstones that still had living family members were distributed to them so that they could be reburied privately and respectfully. Those who did not have family were taken to the cemeteries in Colma and buried there.

The tombstones that were not claimed were used to build retaining walls and drainage systems to avoid erosion in the park. This work was the result of the W.P.A, a work-relief program started by President Franklin D. Roosevelt’s New Deal. This program employed millions of people, and was responsible for improving and building public works including bridges, roads, public buildings, and parks. The workers were asked to make sure none of the names were visible when building the walls and drains, but because mistakes do happen, some of the printing on the tombstones is still visible today.

Through the 1950s and 60s, Buena Vista went through more hardships. Current supervisor Chester MacPhee claimed the park was “unused, unsightly and required a policeman there at all times”, and he proposed selling parts of it. Multiple improvement associations in the community protested the proposal, and so the park remained. The 1960s brought along the Summer of Love in ‘67, which made its mark on the city by taking over the Haight-Ashbury neighborhood. Around 100,000 followers of the hippie counter-cultural movement converged on the neighborhood and took over the park. Because of the many illegal activities and the overwhelming amount of strangers, the park fell into despair until the late 1970’s. No longer a safe place for children or families, crime and indecencies took Buena Vista over. In the late 1970s/early 1980s,  $200,000 was given to renovate the park’s paths and erosion control systems, since the park had sunk from a beautiful family-friendly place to a morally questionable hideout.

Over the next few years, after that nearly fruitless effort, the San Francisco Recreation and Park District developed a two-million-dollar plan to turn the place back into a beautiful, community-friendly park. Over time, the hill’s peak went from a parking lot to a lovely grassy viewpoint, the tennis court and irrigation systems were renovated, and the playground was rebuilt. Local neighborhood associations continued to fight for improvements, giving the park annual tree plantings, garbage clean up parties, monthly workdays to improve gardening and maintenance, improved lighting, and new landscape designs. 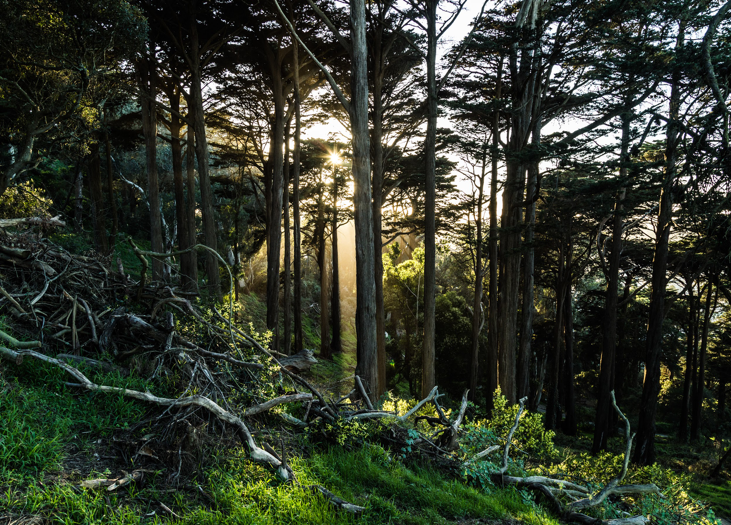 If you visit Buena Vista today, it would be hard to believe that it is the same park that it used to be. It is filled with children, families, and pets enjoying all that the park has to offer: beautiful landscaping, well-maintained trees, a tennis court, a playground, and ‘The Window’, which is the view of the Golden Gate Park, the Pacific Ocean, and the cliffs over Drake’s Bay. The only remembrance of more troubled times is the large painted mural of a peace sign made entirely of flowers, paying homage to the Summer of Love. 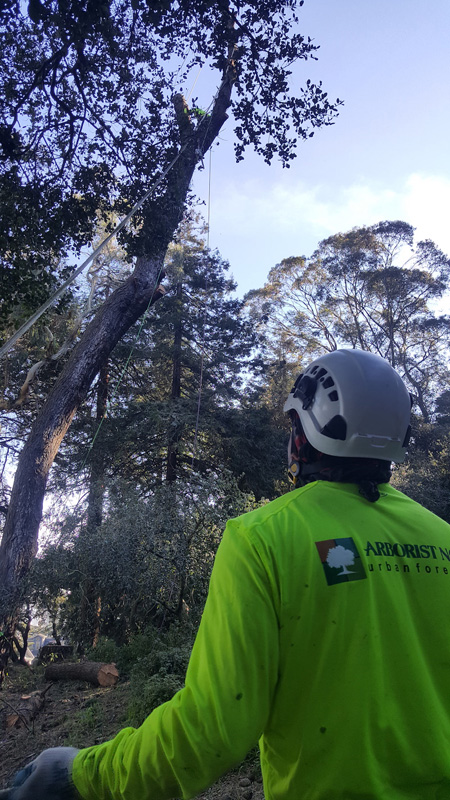 While there are decades of history, hard work, the W.P.A, and communities of locals who refused give up on the park to thank for what it is today, Arborist Now is a huge contributor to the current upkeep and beauty of Buena Vista. We treasure the beautiful, complicated past of this historic park and venture to maintain the picturesque views, the diverse array of trees, and the lingering memories of the past 151 years. By always striving to be true to our motto, the professional care of the trees in the park is truly  “...providing superior quality arboriculture and landscape services” to one of the most beautiful and historic places in our city of San Francisco.