Robinia pseudoacacia (AKA black locust) is a tree native to Eastern North America belonging to the extensive pea family, Fabaceae.

It has long, oval pinnate leaflets with small spines at the base. It has fragrant white, yellowish flowers that are formed in racemes. The flowers become a fruit called a legume, containing 4-10 seeds. The tree can reach heights up to 30 meters with a trunk diameter of up to 1 meter. The bark is described as rough and wrinkly with a brown-grayish color. 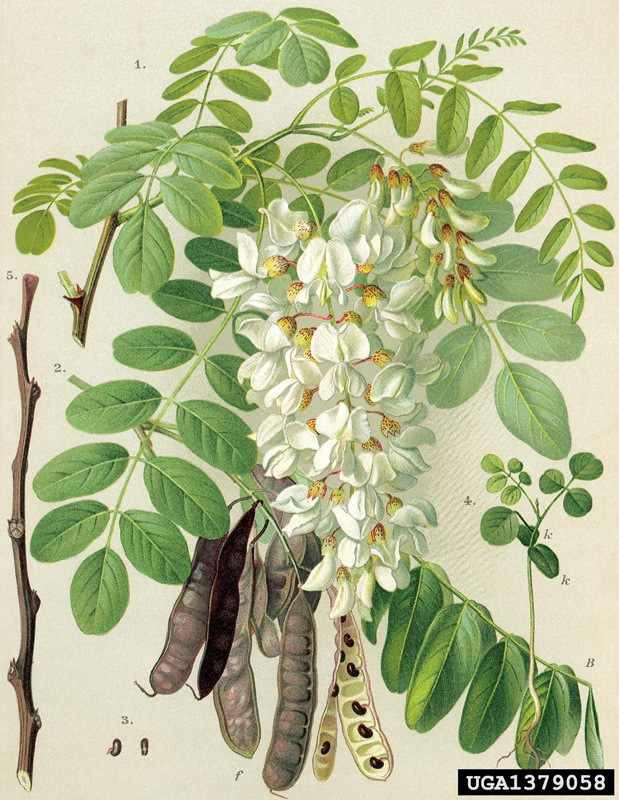 It was first introduced to Europe from North America in the 17th century. The genus Robinia was named by Carl Linnaeus, a swedish botanist, commemorating Jean Robin a botanist of the Kings Henry III, Henry IV and Louis XIII and his son Vespasien Robin. It is believed that Robin was the first one to plant the seed of a Robinia pseudoacacia in one of his gardens in Europe in 1601. One of the trees that he planted still stands today in the Square Rene Viviani in Paris, France. This tree is known to be about 400 years old.

Robinia pseudoacacia was widely cultivated in Europe because of its fast growth, erosion control abilities, and high value wood production, making it an integral part in afforestation, and of the economy in many countries of Europe. It is now known as an invasive species across Europe. Although it is invasive, it is still appreciated by many. The tree has long-lasting quality wood that is highly resistant to rot, it is great for building fences, furniture, and small watercraft. It is an excellent nitrogen fixator bringing health back into the soil aiding as a natural fertilizer. Its flowers are aromatic, and very popular amongst pollinators, especially bees, making it a high yield of honey production.

These trees are amazing creatures that have helped communities around the world for centuries. This tree is a favorite of the founder of Arborist Now, Jean Claude Rochat. He and his family utilize various parts of this tree in different ways for their homestead in Switzerland!