Many landscape plants incur winter damage. Dead branches and twigs found in the spring are often the result of ice and snow damage during the winter.

The rapid drop in temperature during a mid-winter thaw causes bark splitting and frost or freeze results in plant injury. Though the needles on some evergreens display yellowing or bronzing after exposure to winter sun and wind, the normal color will return in the spring. Winter injury may be mistaken for early stages of a fungal disease, which turn the needles from bronze to reddish brown or brown. 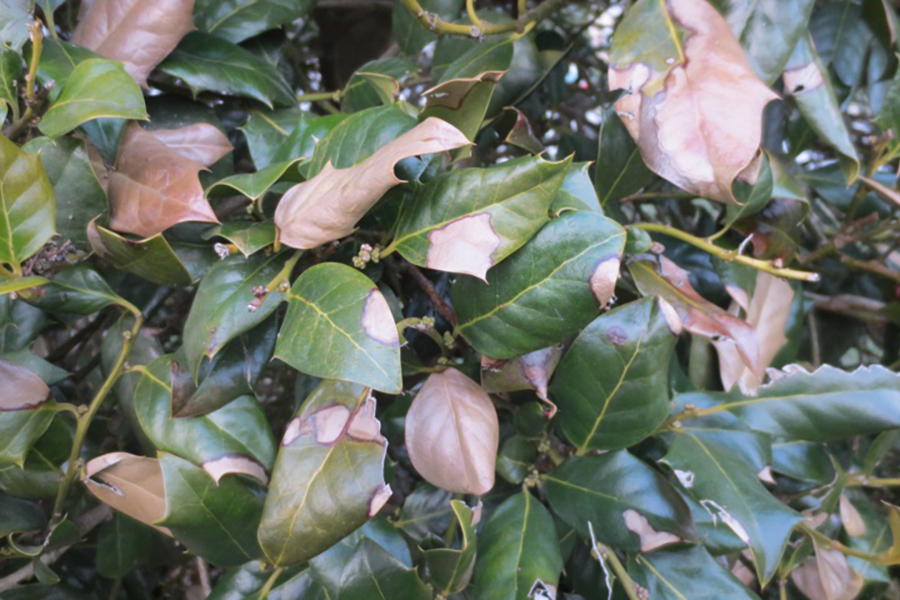 Lasting damage happens when weather conditions are prolonged, severe or with sudden temperature drops. Tissue death is a result of water removed from needles faster than the plant can replace through its roots from frozen water in the soil. Winter scorched needles eventually drop off.

Leaf scorch symptoms occur on broadleaved evergreens. Shallow rooted plants such as azaleas, rhododendron, holly, cherry laurel, boxwood, mountain laurel or those at their northern limit for winter hardiness suffer the most severe damage. Injury also happens on dry, windy, warm, or sunny days when the ground is frozen. The leaves do not receive the water from frozen soil, so they droop, and curl then turn brown on the tips and margins, giving a scorched appearance. Though the damage may occur during the winter months, symptoms often do not appear until the plant emerges from the dormant period and enters the phase of spring growth.

Blight and browning can be caused by warm temperatures in February or March that accelerate growth of buds, flowers or shoots too early. Any later spring frost kills these young buds and tender new growth. Fewer flowers and later leaf development result.
Diagnosis is not difficult, because frozen tissue turns blackish. Damaged buds and leaves drop off and the remaining branches should be pruned if new growth does not appear and the spring season continues.

Diagnosis is easy because frozen tissue turns blackish brown. The damaged buds and leaves usually drop off and the remaining bare branches should be pruned out if new growth does not emerge as spring progresses. Blasted or damaged blooms can result from the freezing of flower buds in early spring before or during flowering. Branch dieback and leaf yellowing can be caused by sunscald, root damage, and cold weather following a warm spell.

Ice and snow damage can result in bent or broken limbs from the heavy weight of snow and ice. Gently remove snow from shrubs with an upward movement of a broom. Do not attempt to remove ice from shrubs because ice-laden branches are brittle and more likely to break. 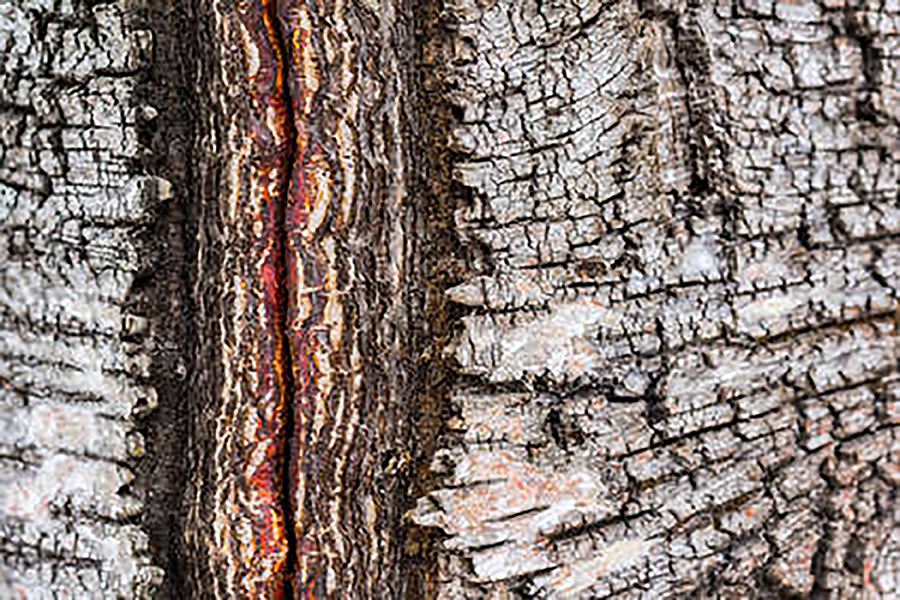 Hardy trees may develop sunscald or frost cracks. Warmed by the winter sun, tree bark can reach a temperature as much as 18 degrees warmer than the air temperature, damaging the cambium layer beneath. This freeze damage is called sunscald.

During extreme fluctuations in temperature, frost cracks occur. When the water in the cells of the tree trunk freezes, it moves out of the cells, causing shrinkage to the wood. The resulting tension between the frozen and unfrozen layers of wood is so great that the wood separates, causing a crack. The crack may form suddenly often with a loud cracking sound. As temperatures warm, the wood absorbs moisture and the crack closes. In subsequent winters, frost cracks can reopen and enlarge and may extend to the center of the tree. This damage to tree trunks in most likely to occur on the south and west sides of the tree where the sun is strongest.

Frost cracks may happen in previously wounded or pruned areas. Proper pruning and avoidance of injury may help to prevent some frost cracks. Tree species prone to frost cracking may benefit from applying white latex paint to the tree trunk. The light color reflects light and helps to reduce temperature fluctuations.

Remember, the best prevention of winter injury is to select plants that are hardy in your area. Reduce winter damage by locating plants in partially shaded areas protected from winter winds. Place any physical barriers about 18 inches away on the windward side of young trees, which helps to reduce winter injury. Maintain adequate soil moisture in the fall to prevent winter dehydration. Inspect plants for winter damage in the spring and prune out affected areas.

Arborist Now is the expert in tree care in the Greater San Francisco Bay Area. Contact us for a consultation with one of our skilled arborists about your landscape and preservations of your trees and shrubs.