Run amok insect shows up in California, after storming its way through vineyards and orchards on the East Coast

After causing millions of dollars in damage in the eastern states, California grape and orchard farmers are on high alert after agricultural officials received reports of an insect native to Asia, the spotted lanternfly.


Why spotted lanternfly may be a big problem for California crops

The destructive insect first appeared in Pennsylvania in 2014 from Asia, and has since spread to New Jersey, Delaware, and Virginia. A recent Penn State study estimated the insect costs Pennsylvania alone about $50 million and nearly 500 jobs each year from the damage it causes to vineyards, hardwood timber forests, Christmas tree farms and orchards.

The alarming concern, experts say, is that if the bug is resilient enough to survive frigid Pennsylvania winters, how will its life cycle be affected in California’s Mediterranean climate. It may not be cold enough here to kill the adult the lanternfly in the winter. The bug is dangerous to California — home to the nation’s largest agricultural economy — for several other reasons, according to experts.

The lanternfly damage can spread quickly. As it can lay its eggs on just about any hard surface, including train boxcars and big-rig trailers —it can quickly reach into new faraway areas and not be detected. Further, the lanternfly’s natural distribution also is a problem. Although it has wings, it largely uses them to glide. But large swarms will climb to the top of towers or trees and catch wind gusts, enabling swarms to spread miles.

The diet of the spotted lanternfly is expansive. It has been observed feeding on the sap of 70 different species of trees and vines, including grapes, nut, and fruit trees — jeopardizing the Central Valley’s orchard and grape industry. 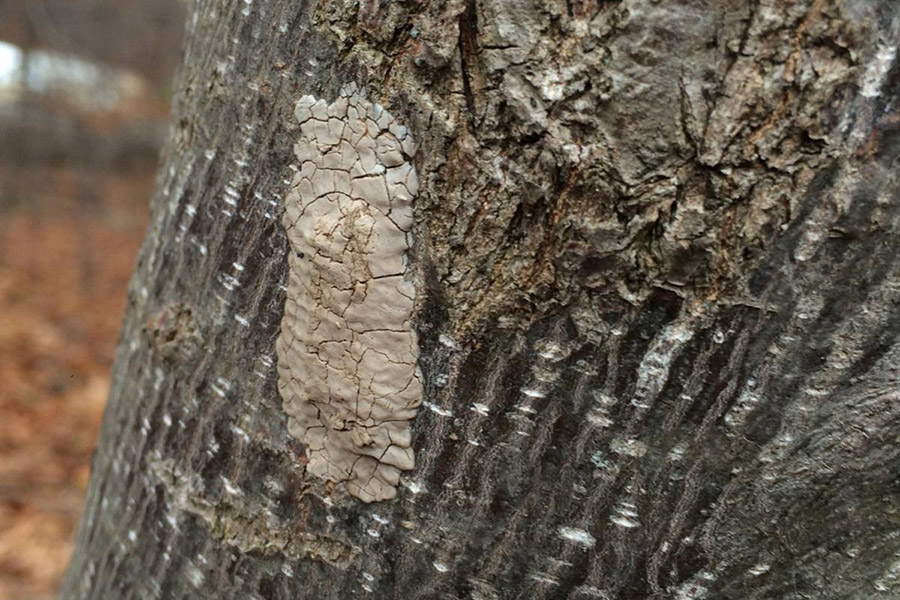 The sap-sucking bug is what is known as “a phloem feeder.” It does not actually feed on a tree’s fruit, but swarms severely weaken plants by draining them of their fluids. It also excretes a sweet goo called “honeydew” that is troublesome for grape vines because gunky mold grows on the dew and causes the plants to rot.

Swarms of the bugs also have been known to hit the same vineyard or orchard over and over, wiping them out in a matter of months or years. Meanwhile, the lanternfly has no known natural predators in North America. Its lovely bright coloring and spots also signal to predators it is likely poisonous.

Some promising news is those same distinct colors and its comparatively large size makes it easier for the average person to spot and report it to invasive insect experts at a University of California Cooperative Extension office or a county agricultural commissioner.

In Asia, the tree-of-heaven is the lanternfly’s host tree. Tree-of-heavens are considered an invasive plant here in North America, including in California, where they were originally planted as ornamental landscaping. Residents should learn what those trees look like and keep an eye on them for lanternfly infestations.

In Pennsylvania, agricultural officials have been using tree-of-heavens as “trap trees” to monitor and kill the bugs, which experts say can easily be killed with pesticides.

An insect expert with the UC Cooperative Extension in San Luis Obispo, said the lanternfly does pose a challenge for California, but hopes that in the next few years, researchers will have the means to remove them. The most likely method would be to use a “biological” method such as breeding one of its natural Asian predators like a wasp to serve as a countermeasure.

For those of you in the San Francisco Bay Area, consider contacting Arborist Now for your pest control and tree damage needs. We can assist with getting rid of pests, assessing any tree damage, and ensuring that your trees are still healthy and thriving. Give us a call today to get started!