Stong winds represent a serious threat for trees. Even relatively modest storms can leave areas with a post-apocalyptic aesthetic. Who hasn’t been dumbfounded at the sight of a mighty oak or redwood lying helplessly on its side with its roots exposed, having been toppled by nothing more than some quickly moving air?

But the true damage wrought by storms doesn’t disappear with the front’s passage – even trees that are able to stay firmly upright may suffer defoliation and broken branches. These problems will haunt the tree for weeks, months and years to come, as it struggles to survive.

Some trees have evolved in high-wind habitats, and most of these have adaptations that allow them to survive storms relatively intact. These tree species are especially well suited for windswept landscapes and storm-stricken shores, and they deserve consideration during your next installation project.

We will examine five different hardwoods today, and we’ll take a look at the conifers and palms capable of withstanding strong winds in a few days.

Flowering dogwoods (Cornus floridana) are an unusual addition to this list, given their propensity for growing in the dense understory of sheltered eastern forests, where strong winds are far from the norm. However, flowering dogwoods have very hard, shock-resistant wood, which helps them withstand high winds. It is important to note that dogwoods have shallow root systems, so damp or compacted soils can predispose them to toppling.

Given their small size, amazing flowers, picturesque growth habit and attractive fall color, flowering dogwoods  have a lot going for them, but their ability to tolerate strong winds helps further endear them to gardeners and homeowners. 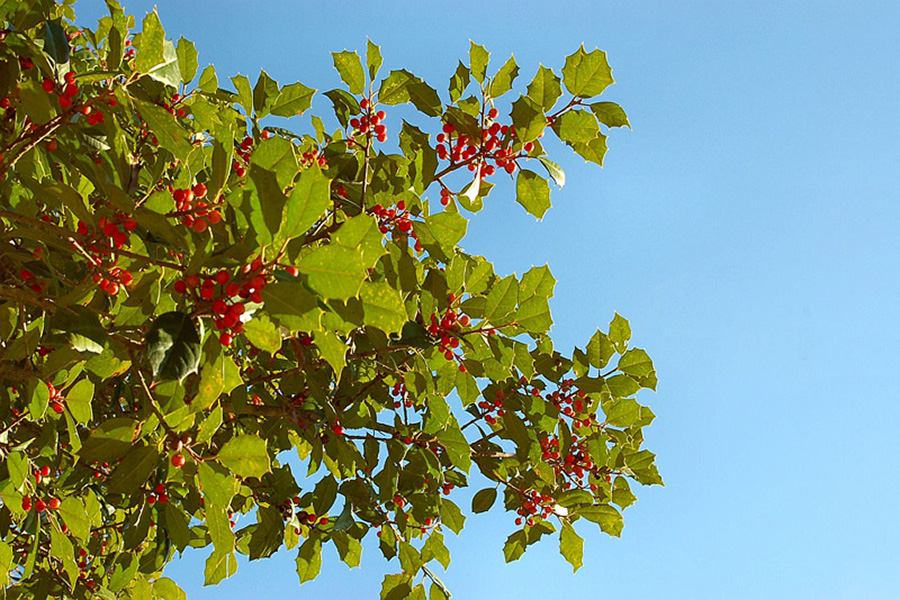 American hollies (Ilex opaca) are another example of an understory species that often withstands strong winds. Although these trees work well as ornamental or accent trees (particularly during the winter), their ability to withstand strong winds make them excellent for screening purposes. Columnar-shaped cultivars, such as the ‘Slim Jim’ American holly, are especially valuable in such applications. 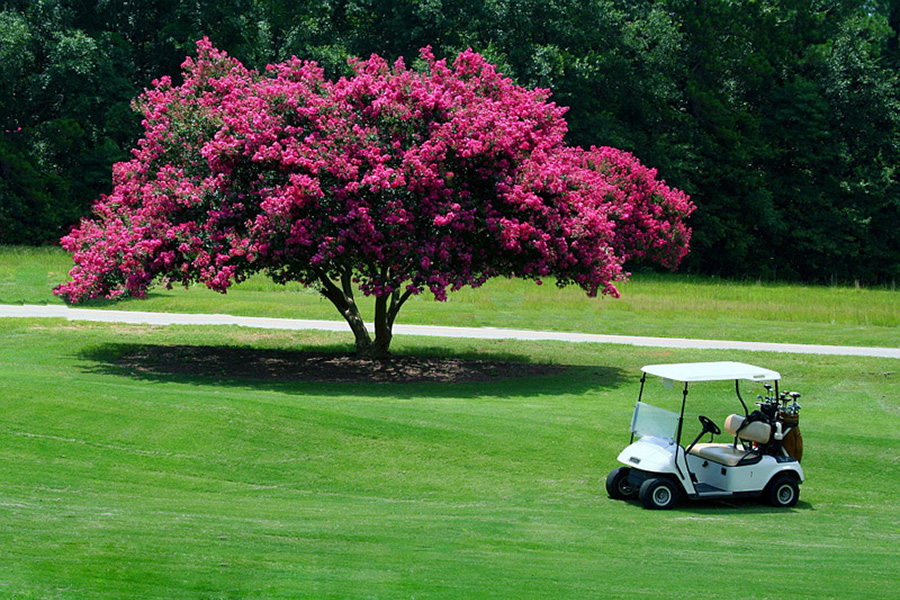 Crepe myrtles (Lagerstroemia spp.) are very common street trees that are well-suited for the purpose. In addition to the ability to tolerate the indignities of urban life, these popularly pollarded trees possess very hard wood, which makes them able to withstand strong coastal winds. Their notably wide root zones – which may exceed the canopy’s spread three-fold – also help stabilize the trees in high winds. 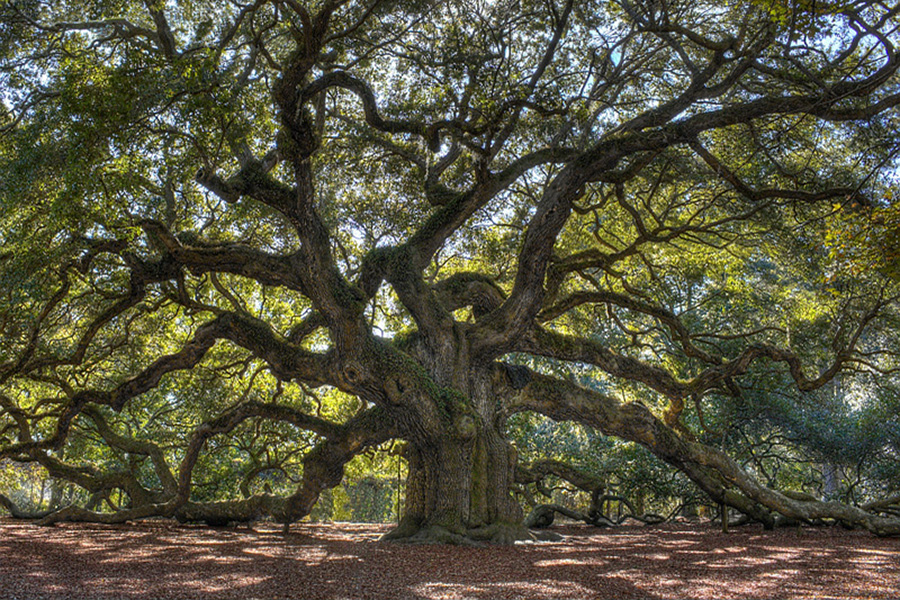 Although they are planted ornamentally in a variety of places, live oaks (Quercus virginiana) grow throughout the coastal plain of the southeastern United States. Like bald cypresses, they have adapted to withstand the periodic hurricanes that blanket this region. Live oaks have very flexible branches that resist breakage better than many other species. In addition to their tendency to withstand storms and high winds, live oaks also offer considerable value as a wildlife species. 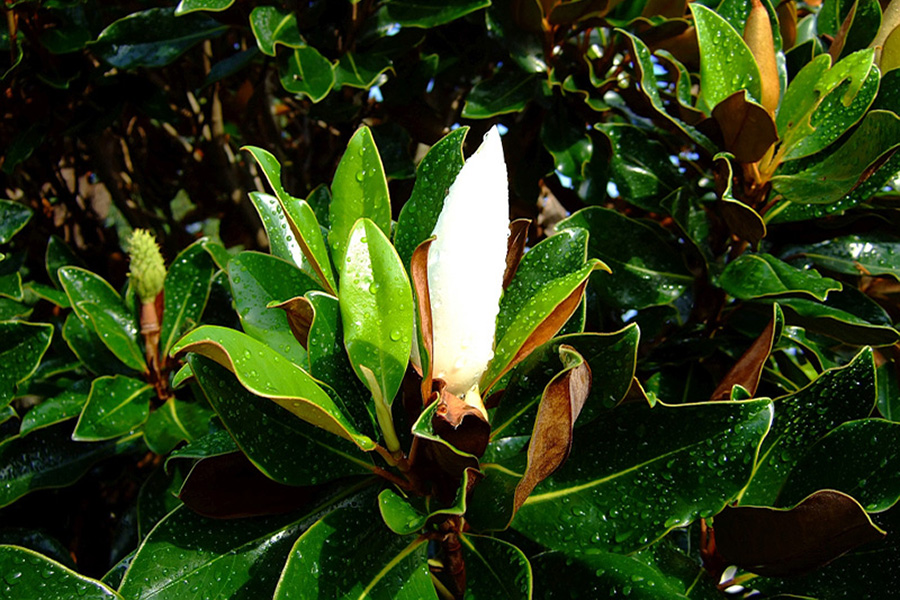 Southern magnolias (Magnolia grandiflora) are another evergreen, understory-dwelling species that are able to withstand strong winds. Notable for their deep green foliage and large white flowers, southern magnolias are relatively large trees, who occasionally reach heights in excess of 80 feet. Like most other species that commonly grow underneath the canopy, southern magnolias do not require full-sun exposure; but they thrive best when provided with about 4 hours of direct sunlight.

Be sure to check back in a few days, when we’ll check out a few palms and conifers that stay strong when the winds howl. Until then, be sure to take a look around your property and look out for any weak, diseased or stressed trees. Such trees are likely to be the first to fail in the case of a passing storm, so contact your favorite neighborhood arborist to set up an inspection and possible pruning.

Fortunately for those living in San Francisco, Larkspur, Millbrae, Redwood City or anywhere in between, tree and shrub pruning services are only a phone call (1-415-310-7781) away! Contact Arborist Now and let us help remedy any and all of your tree-related problems.